First of all, thanks to all of you that have sent messages and kind words. I can’t believe how fortunate I am to have so many great friends all over the world. And a big thank you to the organizers and the volunteers for Ö till Ö, The World SwimRun Championship 2013. We had an amazing time and I will never forget this weekend in the Swedish archipelago. The weather was amazing and we felt really lucky that the wind stayed decent. We got the chance to meet really nice people, other participants that we got to know a little.

I am back home, arrived just in time for a huge thunderstorm. The sky opened up and burst out in thunder and lightning, but I went to bed and slept a whole night for the first time in nine days.

I have been trying to think and form some kind of race report in my head. I don’t know if you are allowed to write a race report when you didn’t finish but it feels important to close this chapter and start over. I had about 20 hours of travelling yesterday and decided to write something, it didn’t go that well. I picked up two new books at Stockholm Airport and finished 1200 pages before I started thinking. (For all of you Swedes out there, Keplers new book Sandmannen was really good.)

If you don’t know what Ö till Ö is please read my previous post and check out www.otillo.se for more info. 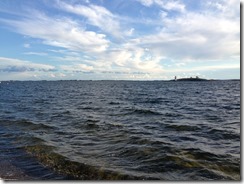 The first swim 10 hours before the race.

For some reason it is hard for me to remember the whole day, the islands kind of float together. The landscape is beautifully intoxicating. The water and islands go so well together and you never get tired from just looking at the horizon. If it would have been a regular summer day I would have sat down on a cliff and enjoyed the view, got my thermos and a cinnamon bun and stretched out to feel the sun. It would be nice to come back and do this again and maybe enjoy the view a bit more.

We didn’t have time to enjoy the view, we felt like two stressed deer in headlights moving over one island after the other, chasing cuts and trying to keep the pace up. We kept a decent running pace but lost too much time in the water. We made 4 out of 5 cuts and raced for almost 12 hours. It felt good to take a shower and go to bed that night. I woke up after 2 hours and thought I had a bad fever. My body was steaming, it was no need for a sauna. My legs swelled up after a few hours and my ankle got more purple and swollen every hour.

We lost a lot of time on the longer swims. The first and longest swim, 1650 meters towards the blinking light on one the islands in the horizon, took a long time. For some reason it didn’t feel long in my head. Maybe it was the helicopter and the boats that made it feel short, maybe it was the vomiting in the beginning that made it so enjoyable

, maybe it was the shock of the cold water. I don’t know. 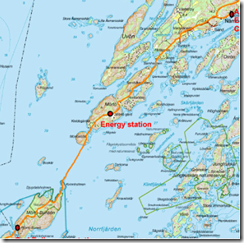 The first two islands was running and jumping over rolling, loose rocks. We stayed close to the edge of the water and our feet were under water for the first 2 hours. I got a rock under my left big toe nail at the first island and it took 12 hours before I got it out.

My fear of waves and the uneasy feeling about swimming in the ocean was cured 10 minutes into the race. On every run I couldn’t wait to get back into the water and get chilled off.

The 1400 meter swim to Kvinnoholmen after 8 hours really sucked the energy out of us. It was windy, cold water, high waves coming in from northwest and it was… the open sea so a wrong turn ends up in Finland. I could see the boats on the side but they kind of disappeared in the wind and the waves. A couple of hundred meters in our rope broke and I saw the pink hook sink in the waves. I dove down and got it and we attached it to my west that after that got a bit stuck over my head at every stroke. At least we were attached together. On all the longer swims I counted breaths or strokes to keep my mind on something and get the time to move faster. This time I told myself that it would probably take 3000 breaths to get over to the other side. 3000 breaths on the right side were I found an air pocket in between the waves, that’s about 6000 strokes. We didn’t even get close to halfway after 3000 breaths. The wind increased and the waves got higher and higher. But, somehow we got over to the other side. The cliffs looked like a wall and we started climbing again.

Even if you move the whole time when swimming you get cold. My fingers and especially my nails turned purple after the first swim. We both had difficulties to use our fingers and hands before and after the swims. It got more and more difficult to get everything on and off. Just opening the hooks felt impossible. It felt like my paddles were made for a 2 y o every time I put them on, it was just impossible to fit my hands thru the holes. Getting water out of the bag felt unnecessary since I knew it would be difficult to get the bottles back in. Probably a big mistake.

After the last long swim, 970 meters Kymmendö Bunsön – Getskär, we knew we had to run fast to make the 4th cut at 4pm. We ran the 2,7k so fast that I didn’t even have time to breath. I thought the race would end for us right there after 10 hours but we made it. We stuffed a Kexchoklad into the wetsuit and jumped off the boat dock and swam the last 300 meters to Ornö. We got out of the water and started running again. A few kilometers in we heard really strong thunder and a few seconds later the sky basically just opened up and it was pouring down. It got really, really cold and I tried to get the arms of the wetsuit on to warm up. For us this was the last part of the race, we realized that we wouldn’t make it to the next cut. We jogged and walked 12k to the next energy station on very sore legs. We were wrapped up in blankets and got drinks and bars and life felt pretty good there for a while.

Something that stole a lot of energy was to get out of the water and up on the cliffs. It is easy to forget that we got in and out of the water 56 times, and there is no time to adjust when you get up, you just have to keep moving and do what you need to do when you are moving forward. I always feel very unstable and dizzy when I get up and I don’t know how many times I took a wrong step and twisted my ankle. The cliffs were brutal. It was slippery, hard and scary. On some places the cliffs are so high and steep, I thought more than once that if I fall I will not walk away alive.

When you read the description of the race 65k running and 10k swimming doesn’t sound that bad. 65k running is about 1,5 marathons and that feels like a doable run, doesn’t it. But the 65k run is one long obstacle course, it was more climbing than running. When you thought that you had a trail around the corner it was cliffs, forest with trees to climb over and bushes that hurt all the way into the bone marrow. Actual running didn’t happen too often. This is the part of the race that feels most surprising but also very exciting. It is impossible to count pace and finishing times since the terrain is so difficult. But this also suck the energy out of every part of your body. Every step you take you have to lift your legs above your knees, and you climb and use your whole body. I have never experienced the pain I had in my calfs and I’ve never felt so tired emotionally as I felt when I reached Ornö after 10 hours in the race.

I bet it sounds like I am whining and complaining. I am but I am not. I loved the race and I could never have imagined before how difficult it would be. It was everything x 1000. I heard a voice in my head that said never again, never again, over and over. But somehow I forgot that and the next morning I could only remember the nice view and beautiful surroundings. The only thing that reminded me of the bad pain, the emotional hopelessness was my beaten body. I don’t know why but I really, really hope I get another chance.

And a huge thank you to Josh Fitchitt and Seby Alary. I don’t think I would have made it to the first island without your coaching and your positive attitudes. Thank you! Merci! 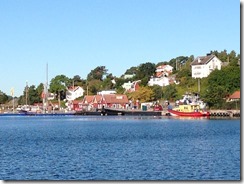 The day after, no waves and sun.